JB-300B/500B Semiautomatic Impact Testing Machine
Usage and Characteristics
Pendulum Semiautomatic Impact Testing Machine also called charpy or izod impact testing machine is used to test anti-impact performance of metal material under dynamic load to judge the quality of material under dynamic load. This machine is semi automatic control testing machine, easy to operate, high effective. Raising pendulum, impact and pendulum dropping are all controlled by electrical equipment. It can make use of spare energy to raise pendulum automatically and be ready for next impact test. It is developed strictly according to GB/T3808-2002 and does impact test with metal material according to GB/T229-2007.It also can satisfy American standards and European standards,like ASTM E23-02a, EN10045, ISO148, ISO83 and other international relative standards. This impact series of testing machines adopt large torque clutch and high-power motor to make the equipment more stable and no vibration when taking pendulum and releasing pendulum
Characteristics of JB-300B/500B Series Semiautomatic Impact Testing Machine: 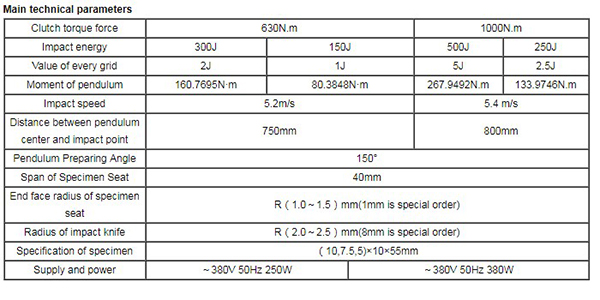 This machine is electric control-box manual control testing machine and makes use of difference between gravitational energy before impacting and spare energy after impacting to display value on dial and get the sample absorbing energy. What the host of this machine adopts casting steel material can make the equipment run steadily at the whole process of test and get more accurate result.
It is easy to operate and high effective. It can make use of spare energy to raise pendulum automatically and be ready for next impact test. It is applicable for the laboratories, which does continuous impact tests as well as metallurgy, machinery manufacturing industries which do large quantities of impact test.

V-notch Cutting is also called Charpy or Izod Notch Broaching, there is manual and motorized option.
Difference between Izod and Charpy Impact Test:
Position of Specimen/Test Material: – In the Izod Impact Test, the specimen is positioned vertically. On the other hand, it is positioned horizontally in the Charpy Impact Test.
Direction of Notch-Face: – The notch of the test material faces the hammer/striker fastened to the pendulum in Izod Test. But, in the case of the Charpy Test, the face of the notch is away from the striker.
Type of Notch: – In impact resistance testing, there two types of notches generally, V-Notch and U-Notch. In the Izod Impact Test, only V-Notch is used but in Charpy Impact Test V-Notch as well as U-Notch both can be used.
Size of Specimen: – The dimension or size of the specimen used in the Izod Test is 75mm x 10mm x 10mm. On the other hand, the dimension of the specimen used is 55mm x 10mm x 10mm in Charpy Test.
Type of Hammer: – The hammers used as a striker in both of the Izod and Charpy Impact Test are different from each other. In the Izod Test, Farming Hammer is used and in Charpy Test, Ball Pin Hammer is used as a striker.
Striking Point: – The point at which the striker strikes or attacks during the experiment/test is also different in both of the tests. In the Izod Impact Test, the striker attacks or strikes at the upper tip of the test material/specimen. But in the case of Charpy, it strikes at the middle point (in the notch) or center of the specimen.
Material Tested: – Only metals can be tested by Charpy Test but Izod Test can be used for testing impact resistance of both metals and plastics.