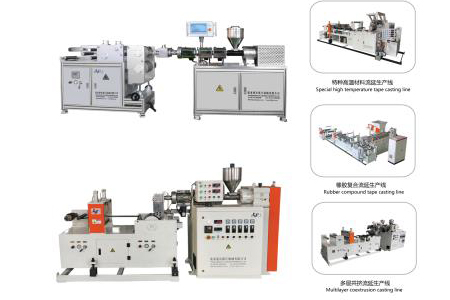 Unlike the blown film process, the cooling of the film with cast extrusion is highly efficient. This allows for higher production line speeds resulting in higher production rates with superior optical properties of the product. The degree of draw and orientation is significantly lower in the cast film process than in the blown film process. This is the reason why the thickness distribution in the machine cross direction is more uniform with cast processes (with variations that could be as low as ± 1.5%). However, the film mechanical properties in the machine cross direction are lower when compared to those obtained with the blown film process due to the higher level of orientation that the film experiences in the blown process.
In cast extrusion the edges of the film are trimmed due to dimensional irregularities and/or poor layer distribution. As a result, the process can be negatively affected if the trimmed material cannot be recycled. Recent flat die system technology has minimized this problem by significantly reducing the amount of wasted material in co-extrusion processes. This subject will be covered to some extent in a subsequent section.

The cast film line includes a precision single screw extruder, a flat die, a film casting, haul-off and winding machine, and a PLC control system (above) or automatic gauge control system (below).